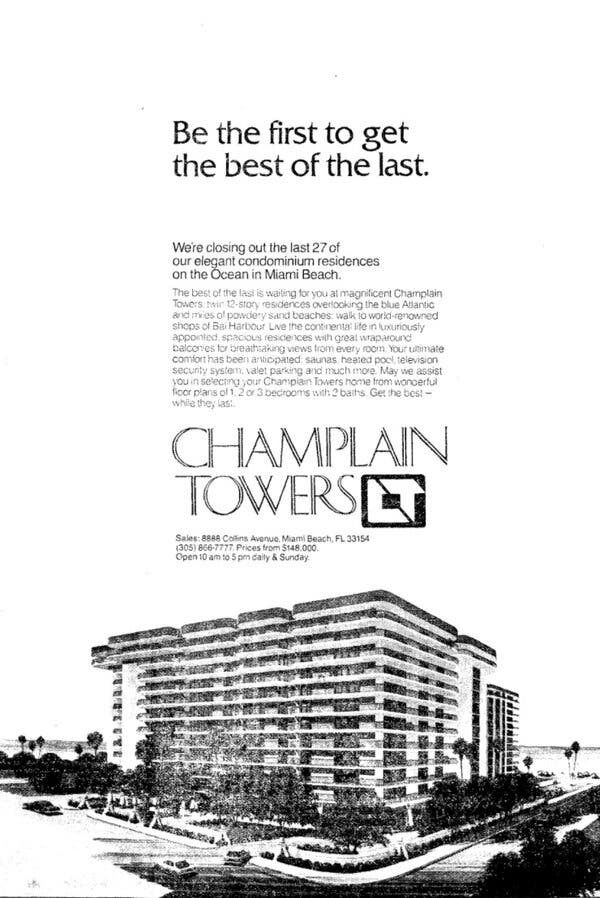 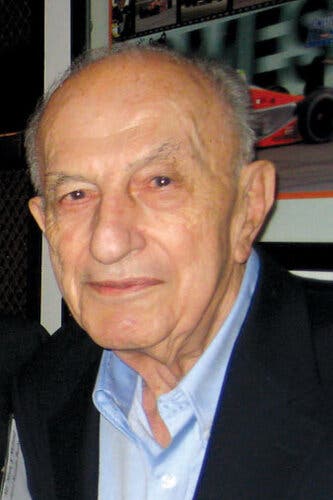 After court proceedings that dragged on for years, Mr. Reiber pleaded guilty to one count of tax evasion in 1996. Family members of Mr. Reiber, who died in 2014, did not respond to messages seeking comment.

But public anticipation was building. A newspaper ad for the unfinished buildings claimed that only 27 residences remained available. “Get the best — while they last,” it advised.

By the end of the summer, the developers hired a new permanent contractor, Arnold Neckman, and in August they applied to add the new “penthouse” floor to each property, raising the buildings from 12 stories to 13. 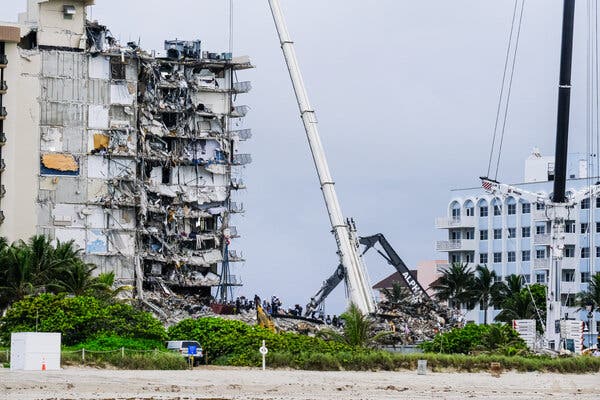 A month later, in November, the town appeared to approve the added-on penthouse permit, although it is unclear who signed off on the idea. Two weeks later, the police chief, serving as the interim town manager, sent a curt memo ordering the contractors to halt work, revoking their penthouse permits. 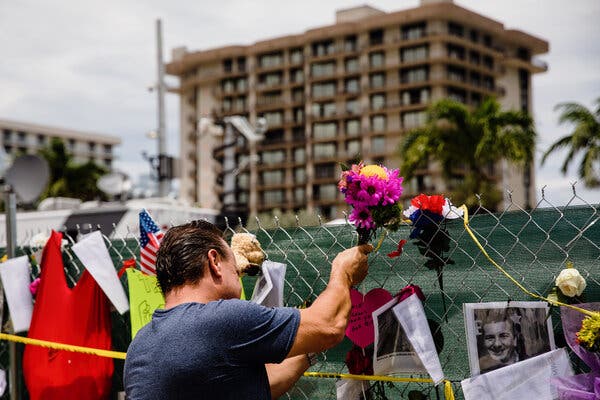 ‘They Were Bullies’: Inside the Turbulent Origins of the Collapsed Florida Condo

The team that developed Champlain Towers managed to build the condos despite checkered pasts, internal strife and a last-minute change that infuriated leaders in Surfside, Fla.

It was in the middle of summer in 1980 when developers raising a pair of luxury condominium towers in Surfside, Fla., went to town officials with an unusual request: They wanted to add an extra floor to each building.

The application to go higher was almost unheard-of for an ambitious development whose construction was already well underway. The builders had not mentioned the added stories in their original plans. It was not clear how much consideration they had given to how the extra floors would affect the structures overall. And, most galling for town officials, the added penthouses would violate height limits designed to prevent laid-back Surfside from becoming another Miami Beach.

At one point, the town building department issued a terse stop-work order.

But records show that in the face of an intense campaign that saw lawyers for the developers threaten lawsuits and argue with officials deep into the night, the opposition folded — and the developers got their way.

Frank Filiberto, who was on the Town Commission at the time, recalled feeling as if the developers regarded him and the other officials as “local yokels.”

“They were bullies,” Mr. Filiberto said. “There was a lot of anger.”

Although there is no indication that the catastrophic collapse of the Champlain Towers South building in June was related to the tacked-on penthouse, the alteration was just one of many contentious parts of a project that was pushed through by aggressive developers at a time when the local government seemed wholly unprepared for a new era of soaring condo projects.

An advertisement for the Champlain Towers that appeared in The Miami Herald in 1980.

Surfside had only a part-time building inspector, George Desharnais, who worked at the same time for Bal Harbour, Bay Harbor Islands and North Bay Village.

Records show that the Surfside building department delegated inspections of the towers back to the Champlain Towers builders, who tapped their own engineer to sign off on construction work. The town manager was unable to resolve the penthouse issue because, just as the issue came before the city, he was arrested on charges — later dismissed — of peeping into the window of a 13-year-old girl and abruptly resigned.

The development team itself had a dubious record.

The architect had been disciplined - previously - for designing a building with a sign structure that later collapsed in a hurricane.

The structural engineer had run into trouble on an earlier project, too, when he signed off on a parking garage with steel reinforcement that was later found to be dangerously insufficient.

The early 1980s was a freewheeling period for construction in the Miami area, known at the time for its uneven enforcement of regulations, but the Champlain Towers project stood apart — both for the tumult that occurred on the job site and the brazenness of the developers behind the project.

Investigators with the National Institute of Standards and Technology are still in the early days of examining the building’s collapse, with ongoing examinations of the integrity of the foundations and the strength of the materials used to support the building. The investigation will include a review of how the building was designed and constructed, including the building’s modifications, the agency said on Wednesday.

By the late 1970s, Surfside was still a humble corner of South Florida, so popular with Canadian snowbirds looking for a discounted slice of paradise that the town dedicated a week to celebrating the connection. Winners of the festival’s beauty pageant could receive a trip to Canada.

One of the Canadians with an eye on the town was the lead developer of Champlain Towers, Nathan Reiber, who brought a grand vision to reshape Surfside’s waterfront at a time when the town was eager to find new sources of tax revenue to keep taxes low for full-time residents.

As Mr. Reiber’s team filed for the first Champlain Towers permits in August 1979 — with no 13th-story penthouses — city officials were struggling with serious inadequacies in the water and sewer systems that had led to a moratorium on new development.

The Champlain Towers developers came up with a plan: They would provide $200,000 toward the needed upgrades — covering half the cost — if they could get to work on construction. The town agreed.

“It was exciting,” said Mitchell Kinzer, who was the mayor at the time. “Here we are, little Surfside, a tiny town getting first-class luxury buildings.”

Mr. Reiber pursued the project even as he was dealing with legal troubles in Canada.

A lawyer from Ontario who had ventured into real estate, Mr. Reiber and two partners were accused by Canadian prosecutors of dodging taxes in the 1970s by plundering the proceeds of coin-operated laundry machines in their buildings in a scheme to lessen their taxable income.

The prosecutor also accused the group of using the expenses of a fake building project to avoid taxes on some $120,000 in rent payments.

After court proceedings that dragged on for years, Mr. Reiber pleaded guilty to one count of tax evasion in 1996.

Family members of Mr. Reiber, who died in 2014, did not respond to messages seeking comment.

About a decade earlier, Mr. Levine and a member of the Miami Beach City Council had been charged with soliciting an $8,000 bribe from a woman who wanted a zoning variance to build a 47-unit apartment building, according to news coverage from the time.

The charge was later dropped. Mr. Levine died in 1999, and a member of his family could not be reached for comment.

In early 1980, the developers had made campaign contributions that were significant at the time — $100 to one commissioner, $200 to another.

Mayor Kinzer objected, and the developers tried to take the money back.

Rick Aiken, the town manager - who later had to step down, said the Champlain Towers builders were constantly pressing the town to move faster on permits.

“They’d call me on the phone, want to take me to lunch - so that I would push the commission toward giving them a permit,” Mr. Aiken said.
He told them that they needed to follow the rules, he said, adding that he could not recall any instances of the developers engaging in improper activity.

‘Grossly inadequate’
As the construction got underway at the Champlain Towers sites, both at their North and South properties, turmoil was emerging and plans were changing.

By May, the project’s lead contractor, Jorge Batievsky, had resigned.

He soon filed a lawsuit, though records from the case have since been destroyed and Mr. Batievsky has died.

The developers brought in a new contractor, Alfred Weisbrod, but problems continued.

As the first levels of the South building were rising above the ground, a crane on site collapsed so violently that its steel was contorted, according to archived video.

A week later, crews discovered that more than $10,000 in wood had been stolen from the site.

Why did Champlain Towers South collapse?
It could take months for investigators to determine precisely why a significant portion of the Surfside, Fla., building collapsed. But there are already some clues about potential reasons for the disaster, including design or construction flaws. Three years before the collapse, a consultant found evidence of “major structural damage” to the concrete slab below the pool deck and “abundant” cracking and crumbling of the columns, beams and walls of the parking garage. Engineers who have visited the wreckage or viewed photos of it say that damaged columns at the building’s base may have less steel reinforcement than was originally planned.

Were residents previously concerned with the building?

Are other buildings in Florida at risk?

What do we know about those who died?

Did anyone survive the collapse?

But public anticipation was building.

A newspaper ad for the unfinished buildings claimed that only 27 residences remained available. “Get the best — while they last,” it advised.

By the end of the summer, the developers hired a new permanent contractor, Arnold Neckman, and in August they applied to add the new “penthouse” floor to each property, raising the buildings from 12 stories to 13.

The added weight brought by the penthouse had the potential to exacerbate a failure and contribute to the progressive collapse that killed 98 people this year, said Mehrdad Sasani, a professor of civil and environmental engineering at Northeastern University - who reviewed the building’s design plans.

He also said the decision to add a new floor to the top of a previous design was not an accepted practice.

But the penthouse addition would not explain the cause of the collapse, Dr. Sasani said, since buildings are designed with large safety margins.

“The relative weight of the penthouse compared to the weight of the structure is not so significant that it could have been an initial cause,” Dr. Sasani said.

There is no record of an objection from the architect on the project, William Friedman, or the structural engineer, Sergio Breiterman.

Both had come to the project after some criticism of their past work. State regulators suspended Mr. Friedman’s license for six months in 1967 after an investigation determined that he had designed a “grossly inadequate” sign structure that fell over during Hurricane Betsy two years prior, damaging the structure of a Miami commercial building, according to records from the Florida Department of Business and Professional Regulation.

About five years before the Champlain Towers project, Mr. Breiterman had been responsible for inspections on a $5 million parking garage in Coral Gables, where officials later found that the walls in the building lacked steel reinforcing rods that would prevent cars from crashing through, according to a 1976 article in The Miami Herald.

Mr. Breiterman also got the job of inspecting work at Champlain Towers. He gave his seal of approval to the work in October 1980, before the penthouse dispute began.

‘A violation of the code’

A month later, in November, the town appeared to approve the added-on penthouse permit, although it is unclear who signed off on the idea.

The memo, sternly warning that the penthouses were in fact a violation of Surfside’s codes, came on town letterhead, with the name of Mr. Aiken, the town manager who by that time had been arrested on the peeping charge, crossed off with a series of X’s.

(The case against him was later dismissed, with Mr. Aiken saying he had been looking for his dog behind people’s homes.)

Then, a week later, the Town Commission voted to allow the penthouses after all.

Mr. Filiberto, the former commissioner, said he believed that some of the penthouse construction was already completed by then. He said the town was left with a tough choice: Grant a variance or order the builder to demolish the penthouse work — and face a lawsuit.

Years later, Mr. Filiberto wondered whether the developers played equally loose with other aspects of the building project.

“If they are that overt in violating the height orders,” he said, “think about all the little intricacies that go into building the building.”