The good news is that there are other ways to find what you're looking for. Try the resources listed below. If you still can't find what you need, let us know and we'll try to track it down for you.

In this lesson, you'll learn about the history of turning lead into gold.

We'll discuss both the ancient practice of alchemy as well as the modern-day concept of nuclear transmutation. ...

What Is Alchemy?
Did you know that if you had the proper equipment and knowledge, you could turn lead into gold? Have you ever read the story of ''Rumpelstiltskin''? If you have, this isn't the first time you've heard of the idea of turning something fairly useless into gold. The story makes reference to the practice of alchemy (spinning straw into gold), though it's not stated explicitly. This may be hard to believe, but the concept of this fairy tale isn't so far-fetched. Keep watching (or reading!) to learn how!

The first attempts at turning lead into gold were made by alchemists. Alchemy is a spiritual belief system in medieval times that was half experimentation and half magic. Practitioners tried to turn less desirable substances into ''high'' metals (like gold and silver). They believed that lead was just a lower form of gold that hadn't been fully matured, so all lead had the ability to become gold. This was not done out of greed typically. Alchemists believed that gold was a spiritually perfect metal, while lead was immature and flawed. ... Alchemists used a substance called the ''philosopher's stone''. It was supposed to be healing, life prolonging, and have the ability to change one metal into another. Not surprisingly, alchemy was unsuccessful. In our modern world, with all the technology and information we have, alchemy sounds a bit ridiculous. However, in its time, alchemy seemed plausible. Even Isaac Newton researched and wrote about alchemy.

- Nuclear Transmutation
In modern times, it has been discovered that lead can in fact be turned into gold, but not through alchemy, and only in insignificant amounts. Nuclear transmutation involves the use of a particle accelerator to change one element into another. Particle accelerators force two different types of radioactive decay, which involves nuclear reactions that can transform one element into another. Let's take a look at some of the different kinds of nuclear transmutation in a little more detail.

- Beta Decay
Beta decay involves a change in the number of protons (and therefore the atomic number) in an atom by 1 but doesn't affect the mass of the atom. There are three types of "beta decay": [  https://www.daviddarling.info/encyclopedia/B/beta_decay.html  ]
[ https://en.wikipedia.org/wiki/Beta_decay ]

( Please note that this content is currently under revision )

Train with the NEA

Train with the NEA

(  Please note that this content is currently under revision )

Since 1989, there has been renewed interest in some OECD Member countries in the concept of separation and transmutation of actinides. Several of them, in general countries with heavy investment in nuclear power, have launched significant programmes in order to evaluate more accurately the validity of this approach from the point of view of waste management and radiation protection, the overall impact on the fuel cycle, and the new scientific and technological problems it would raise. Forecasts are also needed for the economic effects in the longer term.

Some of the NEA committees have already taken a position on this question, or have arranged to study certain aspects of it. Thus, the Radioactive Waste Management Committee has considered the concept as a possibility for the long-term future, and wishes to be kept informed on developments. The Nuclear Science Committee has already made plans to examine some new scientific questions raised by transmutation, while the Nuclear Development Committee is carrying out a general programme of information exchange between the Member countries.

The separation and transmutation of actinides is generally considered as a new option which should be explored. However, the interest, urgency or priority to be assigned to such work will look different according to whether it is seen from a scientific or a strategic point of view and whether the question is considered in a more or less long-term perspective. In fact the committees likely to work on this topic have, by their very nature, points of view and sometimes objectives which may differ significantly and which should be respected. In order to avoid any misunderstanding between the committees the Secretariat may find it useful to demonstrate the overall coherence of NEA's activity, taking the following position:

Recommended introductory texts on the subject of waste transmutation are:

A selection of documents (mostly in pdf format) are available online. More... 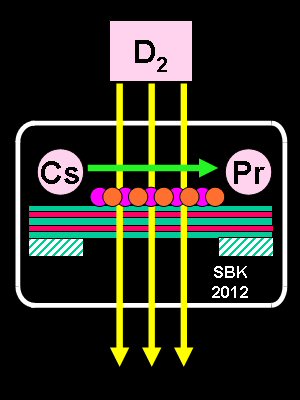 Researchers from Toyota Central Research and Development Laboratories performed an independent replication of a Mitsubishi low-energy nuclear reaction transmutation experiment, according to a physicist from Mitsubishi Heavy Industries speaking at the American Nuclear Society LENR session on Nov. 14 in San Diego, Calif.

The physicist, Yasuhiro Iwamura, told the ANS audience that the Toyota researchers confirmed that nuclear changes from one element to another took place without the use of high-energy nuclear physics. Most scientists who have not followed this field closely consider such profound claims inconceivable. Toyota used a LENR deuterium-permeation transmutation method that Iwamura invented.

Iwamura has been working with this LENR method for 14 years. He said that one of his LENR transmutations was closely but not identically replicated by Toyota. Osaka University and Iwate University previously reported similar replications. 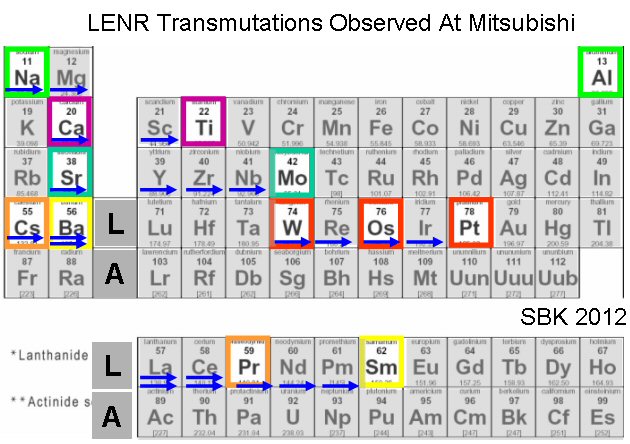 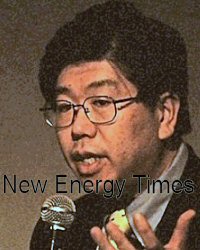 New Energy Times explained the Iwamura deuterium-permeation experimental process in detail two years ago in this article. Iwamura has reported at least half a dozen pairs of transmutations. He finds that abundances of the target element are higher and abundances of the given element are lower after the experiments. He also has seen anomalous isotopic shifts.

Toyota Replication
The Toyota researchers replicated Iwamura’s transmutation of cesium into praseodymium. The researchers tested samples that were not used in experiments, using inductively coupled plasma mass spectrometry, and found that praseodymium exists on the surfaces of the samples as a minor trace contaminant but the amount is one order of magnitude less than the amount of post-experiment praseodymium.

The researchers also took samples that were not used in experiments and completely dissolved them to address the speculation of possible preferential migration from the bulk to the surface. In this case as well, they found that the total amounts of praseodymium in the post-experiment samples were more than one order of magnitude larger than the total amount of praseodymium trace impurities.

Toyota’s conversion rate of cesium to praseodymium was one-to-two orders of magnitude lower than that of Mitsubishi’s; however, the distinction between their tests with cesium and control tests without cesium is unambiguous.

The slide below, shown by Iwamura at ANS, shows 11 of Toyota’s replication attempts. There are three groups of experiments. In the first, the researchers used an electrolytic method to deposit cesium onto the multilayer substrates. The researchers were not able to precisely control the amount of cesium deposited using this method. Regardless, they detected a statistically significant amount of praseodymium in runs #2 and #4. 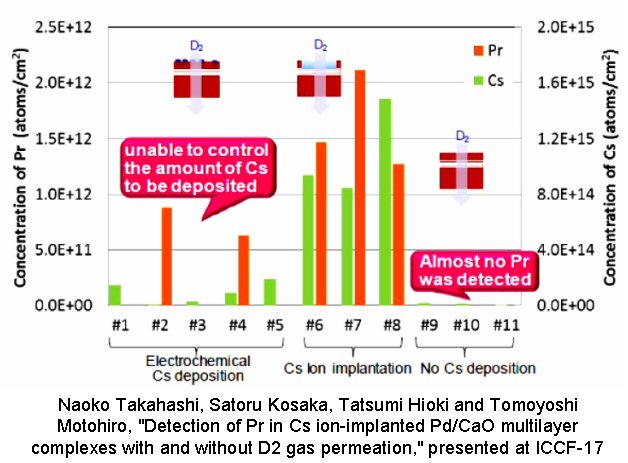 Some of Toyota’s replication attempts of the Mitsubishi LENR transmutation experiment. 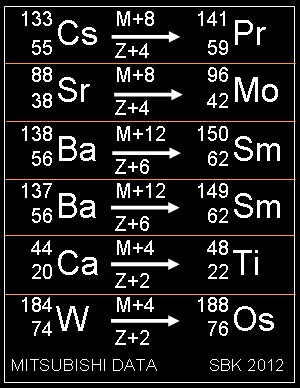 Some of the reported Mitsubishi LENR transmutations.

Summary of Mitsubishi LENR Transmutations
During the last decade, Mitsubishi has observed many pairs of LENR transmutations. The transmutations have increased the atomic number of the target elements by two, four or six protons and the atomic mass by four, eight or 12, respectively. Usually, the given elements show an equivalent decrease in mass, as well. The data are among the most fascinating in the field and may help to explain the underlying mechanisms in these unusual experiments.

Iwamura’s Proposed Mechanism
In 2002, and later in 2009, Iwamura filed U.S. patent applications for his process. In these applications, he cited a proposed mechanism based on his “Electron-Induced Nuclear Reaction” model, which he published in Fusion Technology.[1]

In these documents, he proposes a series of neutron captures followed by cascades of energetic beta-decays. For example, he discusses his transmutation of sodium into aluminum. He proposes that sodium-23 interacts with two dineutrons (a relatively new and questionable concept in physics) to form sodium-27. Sodium-27 then beta-decays to the next chemical element, magnesium-27. Magnesium-27 beta-decays to aluminum-27.

Proposed reactions as shown in Iwamura’s 2002 and 2009 U.S. patent applications. (See below for alternate reaction path.)

Iwamura’s “Electron-Induced Nuclear Reaction” model was not complete, and it didn’t explain any way to create the neutrons, but it was a logical start. He did not perform additional work on his theory. However, the Widom-Larsen theory, published in 2006, did show how neutrons could be created in LENRs.

The Widom-Larsen ultra-low-momentum neutron-catalyzed theory of LENRs presents another way to speculate on the Mitsubishi phenomena through cascades of rapid, energetic beta-decays. According to Larsen’s slide presentations, neutron captures take place in picoseconds, but the decays take much longer. That would result in the following nucleosynthetic pathway.

In the equation above, prompt gammas arising from neutron capture are not shown and are converted into infra-red by heavy electrons in condensed-matter LENR systems.

New Energy Times also asked Iwamura whether he had seen any of the intermediate elements in his transmutation sets. He said that, in most cases, he had not.

New Energy Times asked Iwamura for more details on his tungsten transmutation, specifically, whether he thought he was getting osmium as an intermediate product on the way to platinum. Iwamura was not sure, but he speculated that two reactions are taking place: W182 –> Pt190 and W186 –> Os190.

In his 2012 ANS slides and paper, Iwamura speculates on alpha-capture reactions as a possible mechanism for the transmutations. He said that his speculation about alpha-capture reactions was based purely on his observation of the phenomena and that he does not claim to be a theoretician. He thought that perhaps deuterium nuclei first become 4He nuclei, then the 4He nuclei overcome the Coulomb barrier and are captured by the target element. However, alpha-captures are fusion reactions that normally take place in stars under extreme temperatures.

In Iwamura’s ANS paper, he writes, “There are no established theories that can explain the experimental results without any assumptions, although some attractive models and theories have been proposed [Takahashi] and [Widom-Larsen].”

Akito Takahashi began work in the field as an experimentalist 22 years ago with a unique electrolytic method and soon developed a “cold fusion” theory. Despite our best effort to learn more about Takahashi’s theory from him, our Web page about his theory is sparse. The Widom-Larsen theory, however, has a lot going for it.

Future Progress and Applications
Iwamura said that Mitsubishi is considering his research for three potential applications. The first is for a transmutation facility for radioactive cesium. Mitsubishi is a manufacturer of fission reactors, and cesium-137 is a normal by-product. The second application is the production of rare metals, such as platinum, from abundant metals, such as tungsten. The third application is electrical power generation from excess heat. 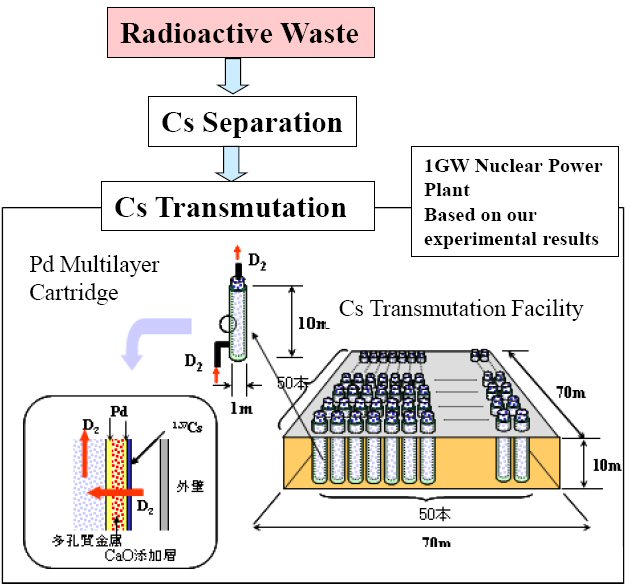 New Energy Times asked Iwamura whether he had attempted to transmute radioactive cesium-137. He said only that his group performed preliminary experiments. A reporter from Nuclear News asked Iwamura what the likely end product of such a LENR transmutation reaction might be. Iwamura said it would probably be europium.

A member of the audience asked Iwamura whether other Japanese companies besides Toyota and Mitsubishi are working on LENR. Iwamura said yes but they were not disclosing it.

Founded in 2000, the New Energy Times news site is the leading source of original, independent news and investigations about low-energy nuclear reactions. Our current focus is on the ITER fusion project. 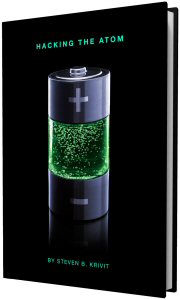 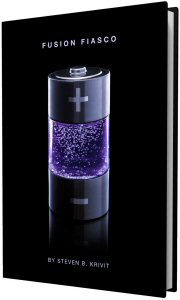 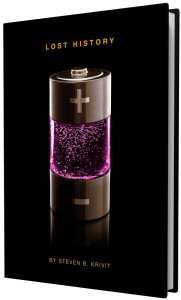 Open Letter to the President of Massachusetts Institute of Technology, Regarding Deceptive Claims by MIT Fusion Scientists