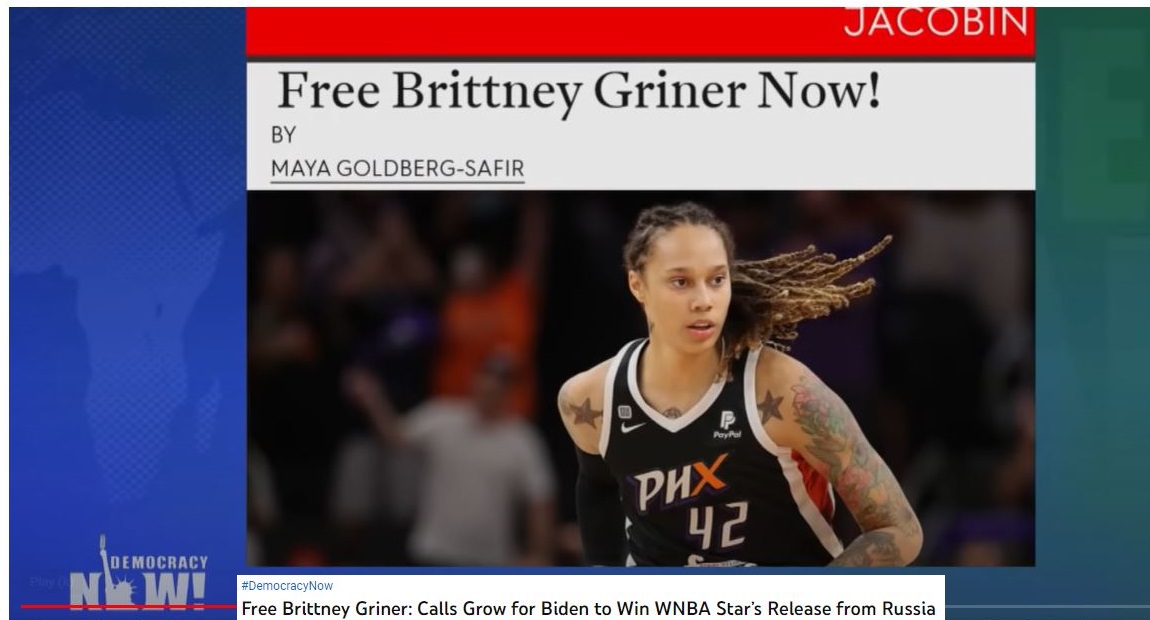 DATE: 8-5-2022  ... ( FULL STATEMENT ) Dear President Biden,  My Medical Doctor is a person - born and raised in Russia - and, was also fundamentally educated there.  But, she is here now (Ohio) - of which I am happy! She is a good Doctor - and a warm person. She has her family - consisting of many persons - also in America. She had pondered a visit - to Russia - with her grandchildren. But, now - this visit is not possible. ... Obviously, my doctor is a "naturalized American". (  https://en.wikipedia.org/wiki/Naturalization   )

But, Brittney Griner was born and raised in America. (As was Paul Whelan ) And, similar to many Americans - I am very angry - at her unfair treatment - in Russia. In fact - her treatment caused me to think of " our American Military philosophy "leave no man behind".  Your released statement evokes similar sentiments: "...  Statement (shown) by President Joe Biden on the Sentencing of Wrongfully Detained American Brittney Griner … ( AUGUST 04, 2022 ) • STATEMENTS AND RELEASES ... Today, American citizen Brittney Griner received a prison sentence that is one more reminder of what the world already knew: Russia is wrongfully detaining Brittney. It’s unacceptable, and I call on Russia to release her immediately so she can be with her wife, loved ones, friends, and teammates.  My administration will continue to work tirelessly and pursue every possible avenue to bring Brittney and Paul Whelan home safely as soon as possible. ###  ..."

Sir, In fact, Hans and I - did travel ( for relaxation ) many years ago. In one instance - we were returning to America - and not able to produce our "documents" for RE-entry. The port was Barbados related. We were very young - and perhaps inebriated. We declared [that] we were "Americans" - to the persons checking us through. They were black people. But the armed guards were kind to us. And - after a slight delay - we boarded our flight - and, returned to Columbus, Ohio's John Glenn International Airport. Clearly deference was given (to us) - because we were white Americans. Now - comes Brittney Griner (a talented, popular - black lesbian American ) - traveling through a Russian Airport - related to her necessary work - in Russia. And, Russia - under Mr. Putin's direction - wrongfully detains her - and, has sentenced her to 9(nine) years in prison - for a minute amount of cannabis oil - perhaps "planted" - because, she is a tall, black American; which, she has every right to use cannabis oil  - for pain - in America. At the worst - she made a mistake.

Sir, Russia is already accusing America - daily - of a "proxy war" - in our assistance - of Ukraine. Russia has "mistakenly" fired missiles into Poland, Moldova etc.

Thus, there is no better moment - or reason - to unleash our FULL assistance - to Ukraine - and kick Russia's ass - by assisting Ukraine - in the exact manner Ukraine is requesting.

As Secretary Austin is aware - the HiMARS system can launch a munition - that will travel 186 miles - and,  Ukraine has several of these HiMARS launch systems - now at their disposal.
[  https://netcentric.unt.edu/content/lockheed-martin-missiles-and-fire-control  ]  Please supply the munition that will permit Ukraine to hit targets inside Russia. This will enable Ukraine's President (Zelenskyy) - to help negotiate - for Paul AND Brittney's immediate release. I realize [that] your administration is seeking to avoid NATO involvement - in the "Russia/Ukraine" conflict - However, Mr. Putin uses that very knowledge - to make himself appear "strong" - to his citizens - while he hides beneath a missile shield - and, commits war crimes. [ https://asc.army.mil/web/portfolio-item/atacms/ ]

Ms. Griner and I - have never met. I am a retired, white woman - who does not typically watch basketball. However, perhaps because, I was born and raised - in "inner-city" Columbus, Ohio - I know - there is a moment when the only solution is to - "kick the bear". Indeed, many young females - in America - are instructed - to kick - any male - who grabs you - right "in the balls".

Now, is that moment!   Ukraine - armed with HiMARS - and, the munition that can travel 186 miles - into Russian territory - will  place Ukraine onto a more equal footing - with Russia. Indeed, Russia - can evacuate - their cities - to avoid death. And, Mr. Putin's citizens - will know - the undeniable truth. ... The American system - of "democracy" is better. Russian scientists and engineers - want to come to the WEST - to America! And, we welcome them! Should Mr. Putin - threaten a Nuclear Strike (again) - Please deploy "Brilliant Pebbles".
[ https://en.wikipedia.org/wiki/Brilliant_Pebbles  ]  My only child - did help get the F-35 program  approved - in our US Congress. Its complementary "Wingman System" - is ready to go  - also. Let's deploy them - in theatre [ https://www.airforcemag.com/ukraine-is-hitting-russian-sams-with-himars-us-considers-future-aviation-contribution/ ] - as a "beta" AND "final acceptance test" - using, US Defense industry volunteers.

https://www.washingtonpost.com/national-security/2022/07/24/ukraine-himars-russia-us/    "...  U.S. administration and military officials have said that one of their top concerns is not provoking Russia into a direct conflict with NATO, even as Ukraine points out that Russia invaded their country without provocation. The range of the ammunition the United States is providing for the HIMARS will not reach across the occupied east to Russia itself from Ukrainian front lines, but it allows what Gen. Mark A. Milley, chairman of the Joint Chiefs of Staff, speaking at a Wednesday news conference with Defense Secretary Lloyd Austin, called an “echelon of fires,” with shorter-range weapons, across various distances. ... The HIMARS have been so effective that Russian Defense Minister Sergei Shoigu has ordered commanders to prioritize them for targeting. Moscow is hoping to use drones — likely bought from Iran, according to U.S. officials — to find and destroy the HIMARS. Russia has already claimed to have hit at least four of the weapons systems. The HIMARS can also fire a munition called the Army Tactical Missile System (ATACMS) with a range of nearly 186 miles, nearly quadruple what they are now supplied with, but the Pentagon has withheld those out of concern the missiles might land in Russia itself. The restriction has frustrated Ukrainian officials, who described it as paternalistic.  ..."

image: Russian Defence Minister Sergei Shoigu delivers a speech during an expanded meeting of the Defence Ministry Board in Moscow, Russia December 21, 2021.
(Sputnik/Mikhail Tereshchenko/Pool via REUTERS )

Aug 2 (Reuters) - The Pentagon on Tuesday (aUGUST 2, 2022)  denied Russian claims that the country had destroyed six U.S.-made HIMARS missile systems since the beginning of the conflict in Ukraine.  Russian Defense Minister Sergei Shoigu, according to "Interfax" [ HEADQUARTERED IN MOSCOW], said on Tuesday that Russia had destroyed the HIMARS after Moscow deployed tens of thousands of troops to Ukraine on Feb. 24.

"We are aware of these latest claims by Minister Shoigu and they are again patently false," Todd Breasseale, the Pentagon's acting spokesman, said."What is happening, however, is that the Ukrainians are employing - with devastating accuracy and effectiveness, each of the fully accounted for precision missile systems the U.S., our Allies, and partners have provided them to defend against Russia’s brutal, criminal invasion," Breasseale added.

NOTE: Russia regularly claims it has hit HIMARS, but has yet to show proof.

Reuters could not verify the accuracy of the reports.

Ukraine officials have said they operate up to a dozen HIMARS systems,
whose accuracy and long range have allowed Kyiv to reduce Russia's artillery advantage.  ..."

"...  President Biden, I write with a reason we should go and get Britteny Griner – and Paul Whelan.  In fact, (circa 1997) I had the experience of a "start-UP" company - calling an "all hands" meeting. The subject - was the fact [that] they were running low on cash.
They wanted to alert the staff - to accept job offers. So, related to this event - I had (previously) been given the responsibility - to hire a person - to create this company's web site. Unaware of cash concerns, I did hire a black man. His accepted quotation was $10k - in US dollars. The web site (he created) was exactly what he proposed [that] he would do. But, soon after the "all hands" meeting - I heard my co-workers speaking - in another cubicle. They were H-1B employees – in the US  - because of their hi-tech abilities. They were discussing the suggestion - of NOT paying the black man - [that] I had hired. One person stated: "No one will care - he is just a 'nigger' "

Thus, one of the plausible reasons Mr. Putin - "wrongfully detained" - Britteny Griner – is a ploy - to "divide and conquer" Americans.

He (Putin) knows some of America’s best soldiers – are black people. He's betting [that] you will not risk WW3" - to go and get her - because, she is a black lesbian. Show him [that] every American is important! Or, as the wise person said  ... "As YOU harm even one American - YOU harm every American!"...  Matthew Chapter 25 verse 40

Another option - is to "green light" - the Ukrainian use of the "HiMARS" weapon -  (ATACMS) - into Russia. However, this may entail some additional concerns – for US citizens – being wrongfully detained - in Russia. ( https://www.cnbc.com/2022/07/29/how-himars-could-change-the-ukraine-russia-war.html ) 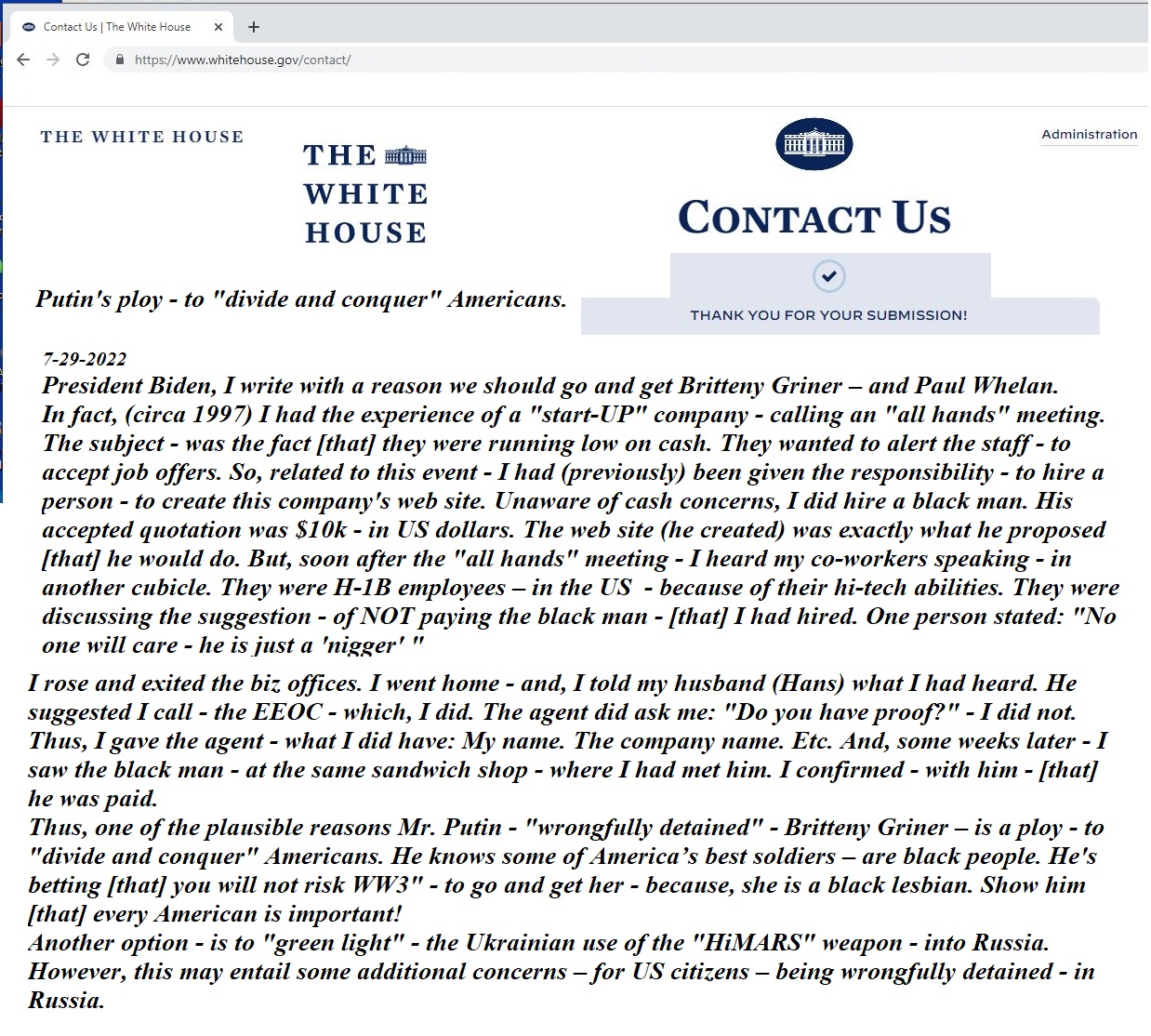