At 12:23 a.m. (May 28) — An EF2 tornado hit northeast of Jamestown in Greene County, beginning along South Charleston Road, where multiple large trees on both sides of the road snapped. A shed was destroyed and metal from it was blown into a field. Most of the roof of a home on Rogers Road, the next road over, was removed. The tornado was on the ground about 9 minutes and covered 4.2 miles.
>> Miami Valley tornadoes: What you need to know today

At 11:48 p.m. (May 27) — An EF1 tornado also hit northeast of Jamestown in Greene County, beginning on Lackey Road and moving across a field between Lackey and South Charleston roads. It was on the ground for about 9 minutes, covered 5.4 miles and ended in extreme western Fayette County.
At 11:34 p.m. (May 27) — An EF2 tornado hit northeast Montgomery County. It covered 7.6 miles in about 11 minutes and touched down initially just south of I-70 near Little York and Dog Leg roads, then headed southeast as it picked up wind speeds west of I-75, most notably on Cricket Lane and on Coppersmith Avenue. The tornado continued east while crossing I-75 then began to weaken and lifted in the vicinity of Needmore Road.
>> HOW TO GET HELP: Emergency shelter locations for those impacted by storms

At 11:19 p.m. (May 27) — An EF0 was confirmed near Phillipsburg in Miami/Montgomery counties. It covered 3 miles and was on the ground roughly five minutes. The tornado hit a property north of Montgomery County Line Road, just east of state Route 721. Farm equipment, a roof and tree damage to a nearby home was confirmed. Half the roof was ripped off an outbuilding west of Hartman Road. On Diamond Mill road, a grain bin was thrown into a field to the east.
>> Dayton woman recounts moment tornado ripped through her home

At 11:12 p.m. (May 27) — A tornado with damage as high as an EF3 hit eastern Montgomery and western/central Greene counties. It covered 10 miles on the ground in about 20 minutes, extending from the Page Manor subdivision in Riverside to along U.S. 68 north of Xenia in Xenia Twp. Several homes along Rushton Drive had entire roofs lifted. Homes along Gardenview and Wendover drives experienced shattered windows, collapsed garage doors and entire roof structures removed. The tornado moved from Kemp Road east-southeast into Beavercreek Twp. The tornado damage ended to the east of U.S. 68 in Xenia Twp., where roof and tree damage occurred north of Clifton Road

At 11:08 p.m. (May 27) — An EF0 touched down along Highway 41 just south of Alcony in Elizabeth Twp. in Miami County. It traveled 1.1 miles and was on the ground about 1 minute.  It moved northeast about a mile before crossing the highway and dissipating just before the Clark County line. Damage included roofing material and tree debris.

At 10:47 p.m. (May 27) — An EF0 touched down south of Troy in Miami County. It was on the ground about 15 minutes and traveled nearly 6 miles. Damage was generally limited to tree damage, some minor roof damage.

At 10:47 p.m. (May 27) — An EF0 touched down south and southeast of Uniopolis in eastern Auglaize County. It was on the ground about 7 minutes and traveled about 4 miles. Damage was observed on trees, guardrails and roofs. One barn was destroyed and others damaged.

At 10:41 p.m. (May 27) — This EF4, carrying winds that reached 170 mph, touched down west of Brookville, continued through Trotwood to Dayton and to Riverside. Initially rated an EF3, it covered 20 miles, was three-fifths of a mile wide, and was on the ground about 30 minutes. Areas on the south side of Brookville sustained heavy damage. A large number of homes and apartment complexes farther east in Trotwood were affected. The tornado continued southeast through Dayton and Northridge, crossing I-75 and into Old North Dayton where homes and businesses were heavily damaged. EF3 damage was initially observed in eastern Trotwood, near Shiloh Springs and Turner roads, and into areas along the Stillwater River and Riverside Drive. EF4 damage was observed along the Riverside Drive area, prompting the upgrade to the EF4. As the tornado entered Riverside, damage lessened before the twister lifted just west of the Greene County line. The National Weather Service upgraded this tornado to an EF-4 (166 to 200 mph winds) on May 30.

>> State of Emergency issued for Trotwood

At 10:25 p.m. (May 27) — An EF3 tornado (140 mph winds) hit near West Milton in Darke and Miami counties. It was on the ground about 20 minutes and traveled nearly 11 miles. It began near Schnorf-Jones and Stocker roads in Darke County, a mile southeast of Pitsburg. The tornado crossed into Miami County, causing significant damage on state Route 721 south of Laura.  It rendered several homes uninhabitable on state Route 571, between South Shiloh and South Range Line roads. The National Weather Service upgraded this tornado from an EF2 (130 mph winds), based on damage analysis, on May 30.
At 10:02 p.m. (May 27) — An EF3 tornado with winds reaching  150 mph was confirmed just west of Celina, near  Township Line and Bunk Hill roads. It was on the ground 7 minutes, traveled roughly 11 miles and was at least 200 yards wide. At least three barns lost nearly half their roofs and dozens of homes were severely damaged. One home was lifted from its foundation with its walls intact and dropped in a field about 70 yards away. Homes in the Fairground Road and Touvelle Street area had significant damage. Multiple cars were lifted and displaced by wind. One man died in the Fairground Road area after an airborne vehicle hit his home.
At 9:57 p.m. (May 27) — An EF1 touched down in New Madison, Darke County, and was on the ground about 2 minutes. Numerous large tree branches were damaged and minor roof damage was done. There was brick damage to the front facade of a downtown business.
At 9:48 p.m. (May 27) — An EF1 touched down 2 miles south of Hollansburg in Darke County. It was on the ground about 2 minutes and covered 1½ miles. It began just inside the state line, carrying a barn roof and walls about 200 yards along Hollansburg-Richmond Road. It continued over an open field until it destroyed another barn south of Moore Road.

hhhhhhhh    Susan's EMAIL FROM FEMA ( 8-28-2019 )  Dear Susan, Thank you for contacting FEMA and giving us the opportunity to assist you. 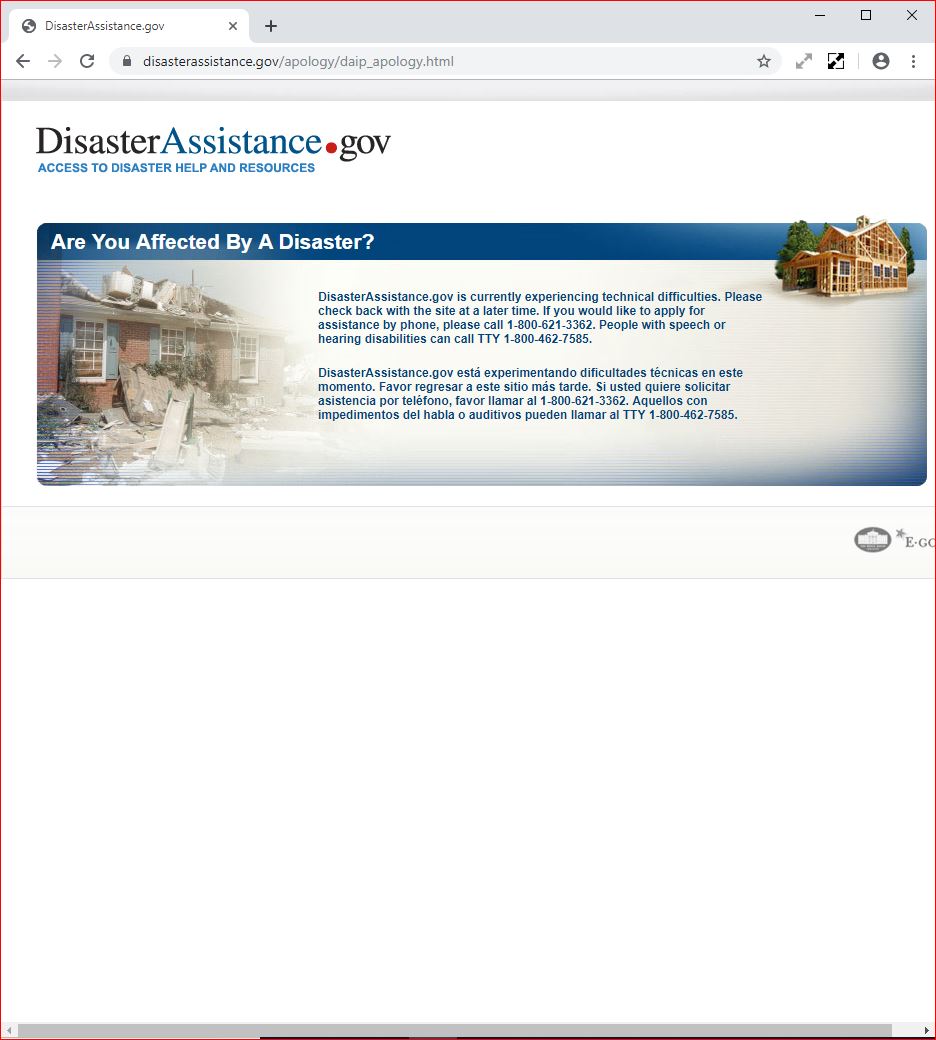 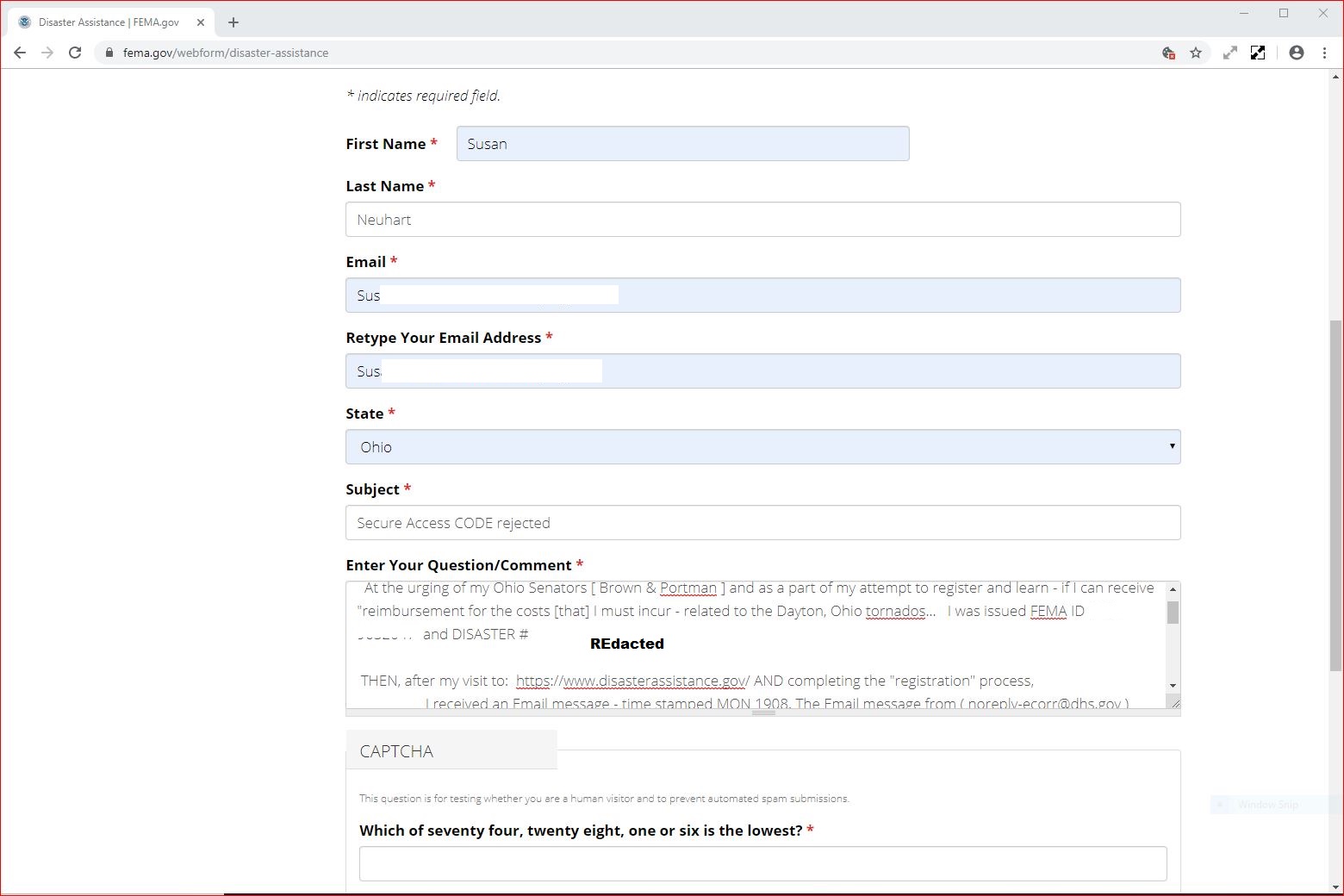 8-27-2019  Dear FEMA Disaster Assistance AGENT,    My name is Susan Marie Neuhart. At the urging of my Ohio Senators [ Brown & Portman ] and as a part of my attempt to register and learn - if I can receive "reimbursement for the costs [that] I must incur - related to the Dayton, Ohio tornados...  I was issued FEMA ID  REDACTED  and DISASTER # REDACTED.  THEN, after my visit to:  https://www.disasterassistance.gov/ AND completing the "registration" process,  I received an Email message - time stamped MON 1908.  The Email message from ( REDACTED  ) stated:

"...Dear Applicant, FEMA has added a letter to your account on www.DisasterAssistance.gov. It is important that you read this information.   You must have an online account to view the FEMA letter. This account is different from your FEMA registration.   If you have already created an account, follow steps 10 and 11 below. ... 10. Follow the instruction listed in the PIN email.  --- done --- 11. Go to www.DisasterAssistance.gov.  --- done ---
12. Click Check Status. --- done ---   ..."

Now, as can be seen on my personal web site HTML page: [  https://hansandcassady.org/DaytonOH-tornado-damage.html ] figures:  image Capture FIGURE Secure Access CODE 1 of  2  AND   image Capture FIGURE Secure Access CODE 2 of  2  (shown at the top of the HTML page cited),  I have been attempting to follow the instructions PROVIDED - since 7:32 AM this morning 8-27-2019 - THAT IS, "requesting" AND "receiving" a "Secure Access CODE" - which, I have then (as instructed) inserted to the web form - ONLY to have it "rejected" - as "invalid".  At this writing - I have tried to perform now, more than twenty (20) times. Again, this is documented on the Interface screen captures posted at my personal web site.  Please help.  - Susan ( # REDACTED  ) 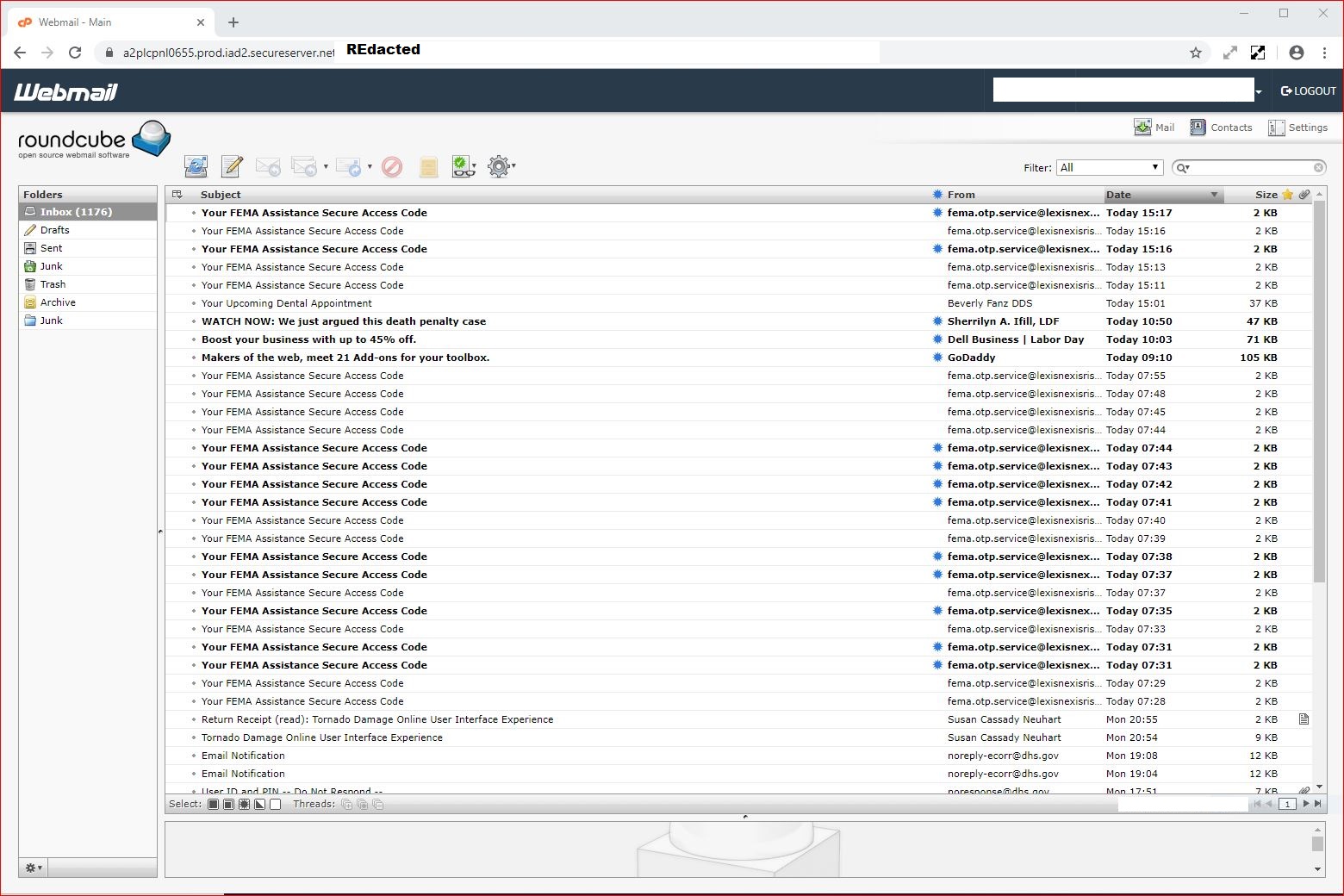 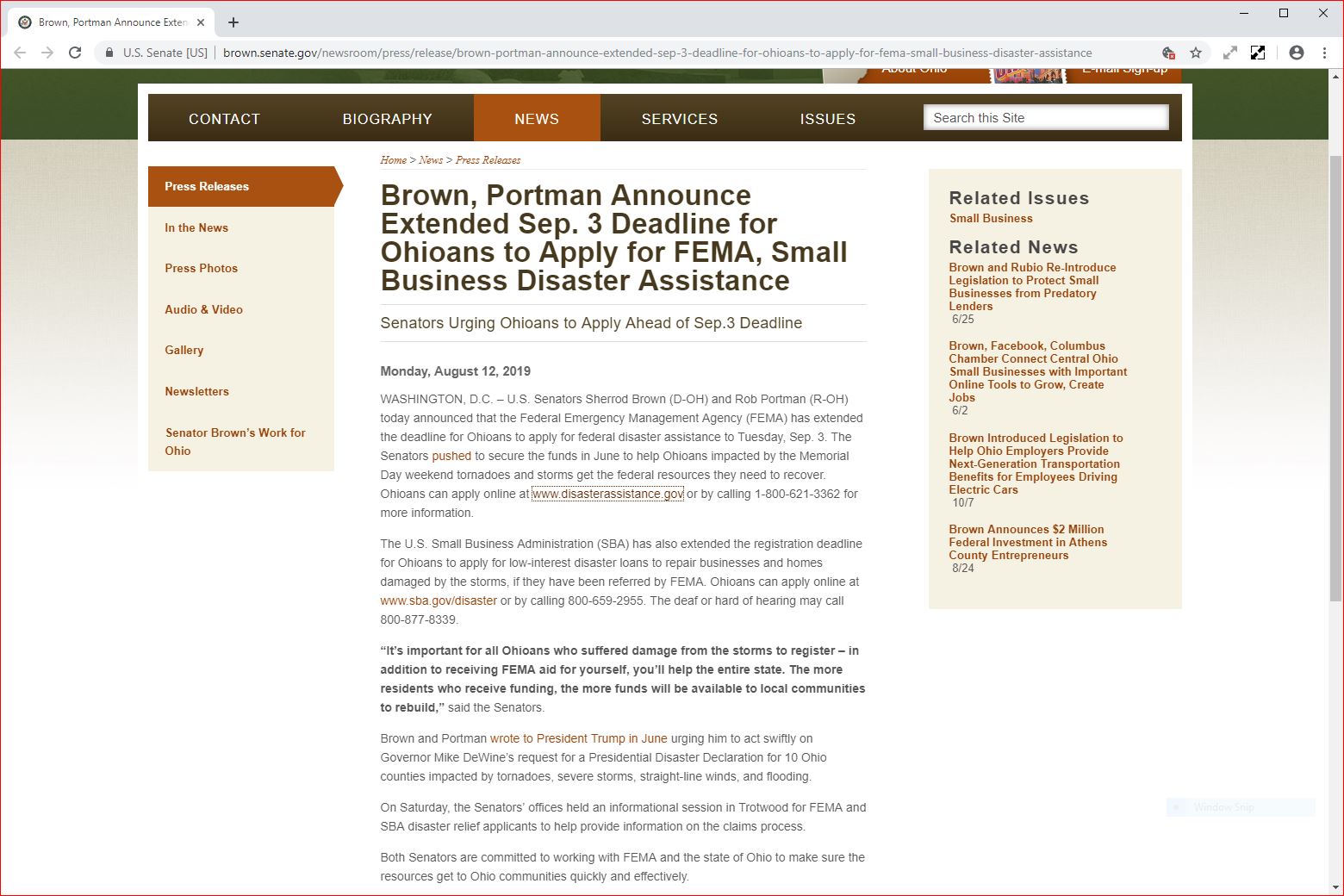 My name is Susan Marie Neuhart.
As a part of my attempt to register and learn - if I can receive "reimbursement for the costs [that] I must incur - related to the Dayton, Ohio tornados... I was issued FEMA ID REDACTED and DISASTER # REDACTED - after my visit to:  https://www.disasterassistance.gov/ AND completing the "registration" process. ( image )

In short, 3 of the 16 tornados [that] traversed my immediate area knocked down very large trees. These trees & the tornados (literally) destroyed some of my neighbor's homes. However, I was very lucky. Although, these 3 tornados did cause a very large tree to fall over near my single-family home (built in 1935); However, the tree only struck my home's rear area. The limited damage - to my home was a destroyed power connection device & communications links. Which, my power company AND Spectrum Communications did repair this damage - some days after the storm. The Dayton municipal authorities ( ZIP 45405 ) then, removed the top of the large fallen tree. However, the tree's main trunk AND some limbs remain to be removed. The yard fencing - under-neath all of this - i.e. remaining tree AND limbs - MAY be damaged. When addressed "professionally" - pickup and disposal - there will be considerable expense.  I utilized your web site ( https://www.disasterassistance.gov/ ) - after being notified - by my Elected Ohio Representatives - [that] many qualified Ohio citizens had NOT applied - and, a significant balance of Federal FEMA funds remains UNclaimed ( News Release IMAGE )

I made a "screen capture" record - of my visit [ 8-26-2019 ] - to help inform - other Senior Citizens [like me] - about my "ONline application" experience.
For example, Ms. Lilly ( My acquaintance from the YMCA ... ) - had her garage completely destroyed. In fact, before my retirement (due to stroke disability) I was a professional Technical Writer - specializing in Software User Interface design. Today, due to a daily YOGA regime - I am physically well.  So, if you feel my UI Design suggestions would be helpful - I will prepare to submit them. I have a personal web site. I could "up-date" my 'tornado' HTML page - with the "redacted" UI screen shots AND my suggestions. Note: "UI" = User Interface.   URL =   https://hansandcassady.org/DaytonOH-tornado-damage.html

THANK YOU!  I look forward to hearing from you (by Email)  - if my User experience may be helpful.  - Susan

"... Description :: You indicated in your registration you have insurance for all or part of the damages identified.

If you have not done so already we recommend you contact your insurance provider to determine your coverage.

If any of your damages were caused by Flooding a FEMA inspector will contact you within 10 - 14 days of this registration to verify your disaster related losses.
Close < button  ..."   Email Address:    FEMA-ContactUs@fema.dhs.gov  ::

THANK YOU! TO EVERYONE - WHO HAS 'INQUIRED'.   YES, Susan lives in the vicinity of tornado paths 12, 13, 14 [information shown below].
These identified [and confirmed] tornadoes - IN FACT - "jumped over" her house [ i.e. HER house was NOT seriously affected ]
- except! the DP&L "power lines" were ripped away.  THEY ARE FIXED NOW.
However - she failed to wear a safety 'inhalation mask' [see Report  pdf ]  ( while helping her neighbors - whose homes & trees were damaged and destroyed - by the tornadoes )
AND she contracted bronchitis  - WHICH, she did NOT know...
Susan was ( then ) treated for "walking pneumonia" - by USA Medical Doctor Lizbeth Bible.  ::  SUSAN IS WELL - AT THIS TIME!
~~  And, with her husband (Han's ) cooperation - [she] will return to the Kleptz YMCA very soon. 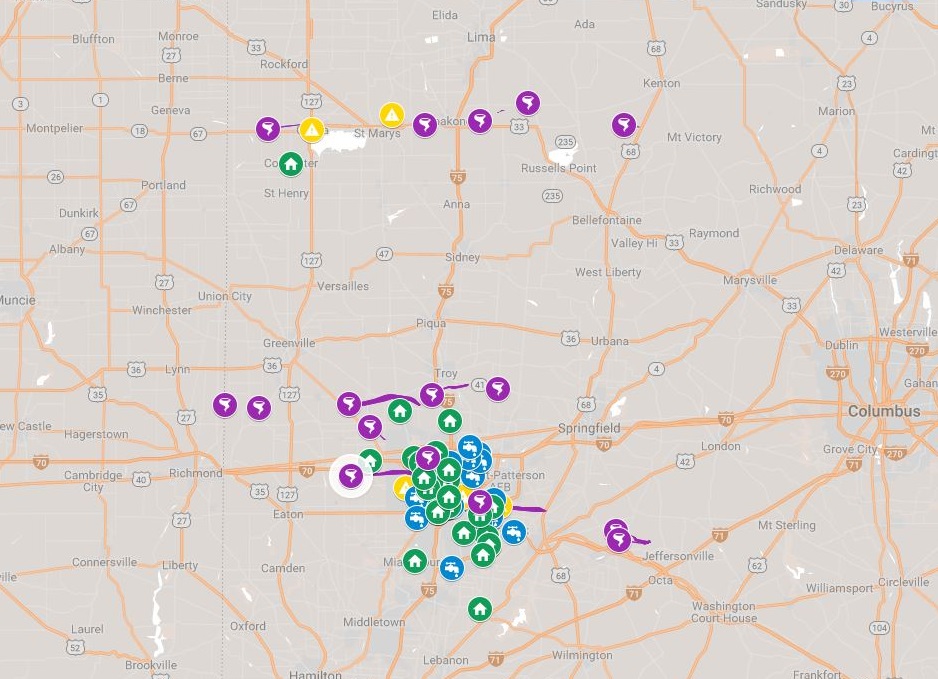